The Grade II listed Wigan Hall – the new HQ of The Sports Office – has been officially opened following the completion of an extensive refurbishment programme.

Viscount Newport, a direct descendant of Orlando Bridgeman who ordered the building’s construction in 1875, was guest of honour at the ceremony. The Mayor of Wigan Councillor Ron Conway, the High Sheriff of Greater Manchester and Wigan Council leader Lord Peter Smith were also present. They were joined by Wigan Warriors and Football League Chairman Ian Lenagan.

The Sports Office Director Andy Clarke said: “We’d like to thank Viscount Newport, the representatives of Wigan Council and everybody who attended our opening. The event was a great success and we’re proud to showcase Wigan Hall as an historic building, which is now also a modern workplace. 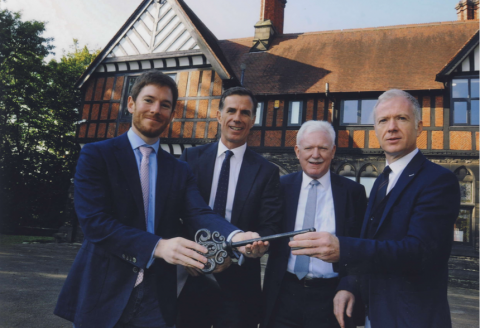 Pictured – Viscount Newport, Phil and Andy Clarke from The Sports Office with Wigan Warriors and EFL Chairman Ian Lenagan, at the grand opening of Wigan Hall.

“We believe this area of the town is developing as a vibrant hub for tech and online business and we are delighted to be playing a role in that process. Our company is in an exciting phase of development and we are receiving an increasing number of approaches from clubs, teams and organisations from around the world.”

And Clarke added:”The Sports Office has experienced tremendous growth in recent years; we work with high-profile clients throughout the world of elite sport. This expansion means we are always seeking to recruit those with degree level qualifications in the areas of IT and coding.

“We are also expanding our sales and client service team and, in both cases, we will always look favourably on applications from locally based talent.”

The Sports Office purchased Wigan Hall from the Diocese of Liverpool. The building was designed in the ‘Arts and Crafts’ style by celebrated architect George Street, whose work included the Royal Courts of Justice. The restoration to convert the Hall’s interior to a modern workplace began in December 2014 and is now fully complete.

Throughout the process, the project team, Oakland Developments ensured their work did not damage or detract from the building’s historical significance and consulted regularly with heritage organisations.  Wigan Hall is now home to 30 members of The Sports Office team. This includes the coding and testing teams as well as the client management and administration departments.

The Hall has previously served as the home of a wealthy Wigan family and was also the official residence of the parish church rector. Its restoration allows passers by to enjoy the building and landscape. It had previously been obscured by overgrown trees. Swiss windows, believed to date back to 1550, have been also restored and preserved inside the Hall.