The Sports Office presence in the North American market has been bolstered following a visit to the territory by its client management team, during which meetings with current and potential new clients were staged.

Clubs in Major League Soccer and the National Hockey League are already using The Sports Office performance management systems and key staff from these and other organisations were involved in the gatherings, which took place in both Canada and USA.

As part of its commitment to the highest possible standards of ongoing support and service, the Sports Office team also delivered further training in the system’s latest functionality. The aim is to ensure all clients maximise usage and gain full value from the system, in areas including coaching, sports medicine, sport science, performance analysis, administration and recruitment.

“The visit was highly productive and we very much enjoyed meeting with our current clients in North American sport”, said Client Manager Carl Pomfret. “It was also pleasing to meet with organisations who are considering using our performance management systems for elite sport, to meet the challenges they face.”

Pomfret added: ”The Leagues and organisations which make up the North American sports market are some of the most progressive and forward thinking in the world and we are delighted to have the opportunity to work with them as they strive to maximise all aspects of their performance and preparation.“ 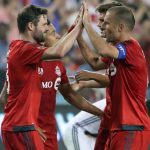 MLS team Toronto FC (pictured) are among the organisations in North American sport to use The Sports Office performance management systems.

In addition to meetings with current clients in both the US and Canada, the Sports Office team also met with potential new clients, who operate in the MLS and the NBA. During the visit, a new client agreement was also reached with a leading franchise in the Canadian Football League.

Among the company’s current clients are many elite sports organisations in other parts of the world. These include teams in SANZAR’s Super Rugby competition, the Australian NRL and European teams competing in the UEFA Champions League.

The Sports Office’s dedicated software for elite football is currently also used by leading clubs in the Barclay’s Premier League, the Sky Bet Championship, the MLS and Australia’s A-League, as well as major football governing bodies, including the Scottish FA.

The adoption of The Sports Office’s online performance management systems, within elite football, has increased to such an extent that the company now supplies more than 20 leading professional clubs across the globe.

Those using the system at first team level include several in the Barclay’s Premier League and Sky Bet Championship, as well as clubs in North America’s MLS and Australasia’s A-League.

Phil Clarke, The Sports Office Managing Director, commented: “We believe this continued growth at the highest levels is a reflection of the capability, quality and reliability of our online performance management systems for elite, professional football.

“Via feedback we receive from our expanding client base, we have seen that our systems deliver a major positive performance impact for the organisations which adopt them.”

Clarke added: “We have recently completed a major system update which has delivered increased functionality, an improved design and an enhanced user experience. We look forward to continuing our work to support both existing and new clients.”