Reaching the end of the 2017/18 football season, The Sports Office clients have had phenomenal results. The Champions of the Premier League and finalists of the Champions League, along with League 1 winners and the Women’s Super League cup finalists are among a few TSO Clients.

Stuart Jones, Client Manager said, “It’s fantastic news for the company and we are delighted to be associated with the most successful teams in men’s and women’s football.

Our aim at The Sports Office is to assist the clubs in any way possible. With all off-field performance data in order, we help to maximise the team’s performance and it’s always great to see our clients have success.”

Clubs, academies and federations use our systems globally to provide support to senior management, player personnel and athletes.  Find modules for coaching, medical and conditioning, scouting and recruitment. Furthermore, the centralised systems include an extensive range of features, to support all departments required by the club. Some of our features include video, intra-club communication, finance and report generation.

To use the performance management systems of elite soccer champions, contact us.

The record Wembley attendance earlier this month for the Women’s FA Cup Final has underlined the growing profile of this branch of the game and The Sports Office team were delighted to see client club Manchester City secure victory under the world-famous arch.

Man City Women beat Birmingham City Ladies 4-1, in front of a bumper 35,271 crowd. The winning side featured the likes of England skipper Steph Houghton and star US signing Carli Lloyd. As well as the “Light Blues”, women’s teams at Chelsea, Arsenal, Southampton, Oxford United and Bristol City are all users of “The Football Squad’’, The Sports Office’s performance management system for elite soccer.

This growing sector of the game benefits from the system’s powerful functionality. And Sports Office Business Development Manager Tom Leather says the company is pleased to have played a part in supporting the success of all teams and of women’s football as a whole.

He said: “It’s great to see the women’s game developing so rapidly, as well as the increasing recognition for the professional standards of the competitions and the teams.”

“And of course we’d like send our congratulations to Manchester City Women for their great victory in the Cup Final at Wembley. We understand the team are aiming to secure more success in the future and we believe the “The Football Squad’’ will support them as they move forward.” 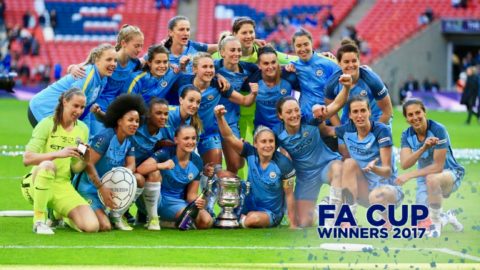 Women’s football is set for further profile boosts in the coming months. The UEFA Women’s EURO 2017 kicks off this July in the Netherlands and for the first time, the tournament will involve 16 teams. The FA have also recently launched Gameplan for Growth, which is a drive to double participation and grow the fanbase.

The Sports Office works with more than 100 professional football clubs, competing in the world’s most high-profile competitions. Several major national governing bodies have also chosen to adopt The Sports Office. One of these is the Scottish FA, who use it throughout their structures, including for all their national teams and at all seven of their Performance Schools.

The Sports Office is delighted to be chosen to supply Melbourne City FC with an online performance management system.

The club – which is part of the global network of organisations owned by reigning Barclay’s Premier League champions Manchester City –  compete in Australia’s rapidly developing A-League.

“Like many high-profile football clubs in elite competitions, Melbourne require access to high-quality management information which creates insight and intelligence.  The Sports Office system will enable them to generate this and allow evidence based decision making at every stage of their performance cycle.”

The Sports Office supply performance management systems to several elite football clubs who play in the world’s most high profile competitions. These include Manchester City in the Barclay’s Premier League and Toronto FC in the MLS, in the United States.

The Scottish FA have also chosen to use The Sports Office’s software at all seven of their Performance Schools throughout the country.